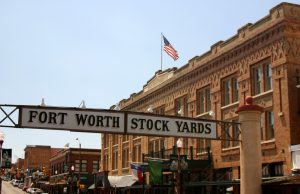 If you’re new to Fort Worth you may have heard the Stockyards mentioned again and again and perhaps wondered what the fuss is all about. The Fort Worth Stockyards are the last remaining stockyards in the United States, and are a huge piece of Western history. If you’ve not been there yet, then you should take a gander over there and check things out. There is plenty to enjoy. If you are new to Fort Worth and looking for a dentist, check us out, too!

A Little Bit of History

A 206-acre spread, the Fort Worth Union Stockyards opened for business in January of 1890, and experienced immediate success due to the railroad. By 1907, the Stockyards sold a million cattle per year and was a place where hogs, sheep, and cattle were bought, sold and slaughtered. Fort Worth remained an important part of the cattle industry until the 1950s when business began to suffer because livestock auctions began being held closer to where the livestock were actually produced.

Listed on the National Register in 1976 as a historical district, the Fort Worth Stockyards celebrates its long tradition as part of the cattle industry with a daily Longhorn cattle drive. There are numerous other things to do and see to celebrate “Where the West begins” such as take a train ride, catch a shootout show, explore the museums, eat, drink, and be merry. The Stockyards consist of entertainment and shopping venues capitalizing on the “Cowtown” image, including: