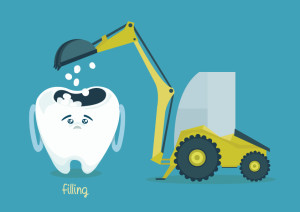 Did you know that dental fillings date as far back as the T’ang Dynasty in China, AD 618-907?  They may have been used even before that. Did you ever wonder if you really need to fill a cavity? What would happen if you didn’t? What exactly is a cavity? A cavity is the collapse of the outer layer of your tooth enamel causing an indention or a hole. If you leave a cavity untreated it will work its way into the pulp of your tooth causing pain and eventual tooth loss. Find out how much you know about cavities and fillings by taking the quiz below.

ABOUT YOUR NORTH RICHLAND HILLS DENTIST:

With over 25 years of professional experience, Dr. Steven M. Huffstutler and his caring team proudly provide exceptional preventive, cosmetic, and restorative dental treatment to patients and their families across Dallas/Ft. Worth, including North Richland Hills, Denton, the Mid-cities, Southlake, and all surrounding communities. We also have extensive experience helping patients find relief from painful TMJ disorders (various forms of jaw dysfunction). To schedule an appointment with Dr. Huffstutler, contact our office today by calling 817-577-1444.