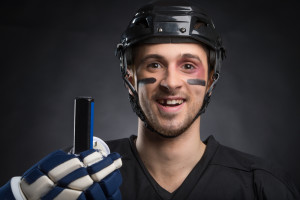 We all know that sports can be rough and tough, especially adult sports. Whether they are being played for fun or being played professionally, accidents and injuries can happen during games and they do. You see it for yourself during nationally televised football, baseball, basketball, and hockey games. The news casters can give a blow-by-blow of the situation. Well…today’s news story is being brought to you by Steve M. Huffstutler, DDS, and is titled A Sports Mishap.

A few weeks ago during a Sunday afternoon hockey game, Ryan Reaves did an interesting thing…

Ryan Reaves, the forward for the hockey team the St. Louis Blues, pulled his own tooth during a game. We all know hockey can be rough, and according to a news source, Brent Seabrook from the Chicago Blackhawks delivered a hard hit to Reaves which sent Reaves face-first into the glass.  The casualty was Reaves tooth, which he calmly pulled out on his own. Reaves then handed it to a trainer.

What He Should Have Done

When getting your tooth knocked out there are steps you should take to save it. If you are able to save your tooth and get to a dentist in a timely manner, the dentist may be able to reattach the tooth, saving you the cost and inconvenience of a future implant. The steps Reaves should have taken include:

Or maybe they keep a sports dentist on site?

ABOUT YOUR NORTH RICHLAND HILLS DENTIST:

With over 25 years of professional experience, Dr. Steven M. Huffstutler and his caring team proudly provide exceptional preventive, cosmetic, and restorative dental treatment to patients and their families across Dallas/Ft. Worth, including North Richland Hills, Denton, the Mid-cities, Southlake, and all surrounding communities. We also have extensive experience helping patients find relief from painful TMJ disorders (various forms of jaw dysfunction). To schedule an appointment with Dr. Huffstutler, contact our office today by calling 817-577-1444.